The news hit the city on Thursday, September 8. Queen Elizabeth II, Britain’s longest-serving monarch who reigned almost seventy years, died at Balmoral Castle in Scotland. New York’s response to the news was deep grief and devastation. At the end of her life, she was surrounded by her loved ones, reported popular news channels.

The city expressed its deep respect and love for the Queen with the Empire State Building lighting up, sparkling in silver and purple against the city’s skyline on Thursday to honor the Her Majesty Queen Elizabeth’s life and legacy, according to the historic skyscraper’s official Twitter account. The Queen had graced the top of the building over a half-century ago- when the Empire State Building was the tallest skyscraper in the world- a stark reminder of the length of her reign and the birth of technological advancements she saw in her lifetime.

The brilliant purple of the Empire State Building signifies not only the royal status of the Queen but has been associated with royalty, power, and wealth for centuries. The elite status that the color purple holds comes from the rarity and cost of the dye used to produce it. Coincidentally, Queen Elizabeth was surprisingly fond of the color, choosing to don bright, powerful shades of it on many occasions.

The Queen’s death opened up a dam of emotion, with thousands of devoted people and heartbroken mourners gathering outside the Palace, drenched in the grey rain on the Palace stairs. The scene was not limited to the Palace surroundings; people across the globe felt the monarch’s passing and mourned in their ways. The Queen’s worldwide influence, appeal, and inspiration led royal fans to lay flowers outside the British embassies, including Washington, Berlin, and Oslo.

In New York, the Nasdaq billboard in Times Square was lit with a vibrant image of the late Queen. A moment of silence was also held in honor of the 70 years of service by the Queen before the U.S. Open match and the New York Yankees game. Members of the New York Yankees also took a moment of silence to honor Queen Elizabeth II before the game against the Minnesota Twins began at the Yankee Stadium on Thursday.

Even as the news of the Queen’s doctors announcing their concern for the Queen’s health broke, speculation and worry over her demise had already begun; Worried, the people of New York and royal fans flocked to a particular establishment in Midtown Manhattan called the Churchill Tavern. The Tavern is a purely British establishment in the heart of New York and, for many ex-pats, brings a taste and feel of home. It has long since been the place for a New Yorker to be during any British Royal event.

Patrons of the Churchill Tavern had devoted it to a shrine as soon as Her Majesty’s news of passing was announced. Among the patrons gathering in the unofficial wake were tourists and ex-pats from Britain, England, and Australia. The people might have been from different longitudes and latitudes of the globe, but all of them agreed they wanted to mark the tremendous historical loss and were saddened and confused at the fate of the monarchy now.

Like every New Yorker, these ex-pats are opinionated on the future of the British Monarchy. Scott Robertson, the owner of the now-renowned Churchill Pub, a British ex-pat and now a seasoned New Yorker, had been overtaken by grief at the news of the Queen’s death. He had at once left to find white lilies, the Queen’s favorite, to mourn her, and when he could not find them, he left red roses outside the pub to pay tribute to the Queen.

The news of the Queen’s sudden death had deeply affected the pub owner, who said: ‘When I heard I shed a tear, she’s the one who has been around our whole lives. We have been busy, we did get an idea when we heard, and we will do something for the funeral.’

Churchill Tavern has been a pillar in the community for New York Brits. As an establishment, they have stood steadfastly by British traditions. The pub opened in 2011 and was named after British Prime Minister Winston Churchill. Churchill and the Queen were good friends and great leaders, so the nod to their friendship was significant at this time.

The Churchill Tavern has been dedicated to covering all significant royal events of the Royal Family, from weddings, christenings, and the Jubilee.

On how his pub had become a familiar haven for New York Brits, he relished the feeling of the English community he had built around his little pub where Brits could gather and have a pint. ‘Seeing all this the community, how big an English community there is in New York, and what I think we do as Brits, we all like to come together having a pint. It’s what we do.’

The desolate evening of New York City saw a solemn crowd of Americans, British ex-pats, and tourists flocking in droves to the Churchill Tavern in Midtown Manhatten- and other famous British places- where tributes to the longest-serving British monarch were paid. Beer toasts, flowers, and signs reading, ‘Long Live the Queen and ‘Queen Elizabeth RIP’ were sighted at the somber gatherings.

Brits all over the country and city expressed sorrow at the Queen’s passing. An ex-pat who currently lives in Houston shared how upon hearing the news, he sought comfort from his fellow Englishmen. He said: ‘In solace, the British all come together, in times of adversity, and that’s what’s happening now.

Another similar case of a young Londoner with pain and grief clear on his face: ‘I shed a tear; I was woken up to be told that the Queen had died, and I think it’s fair to say I cried and was upset when I heard.

‘I think Americans don’t understand precisely what’s happened; they don’t have a monarchy, so that’s why we came to a British pub. I would want Charles to be King because I respect the way of succession. But if you could choose, I’d have William”.

An English pair from Hove in England, Paula and Ettie, were on holiday from the U.K to New York for two weeks. Upon hearing the sad news, they made a pilgrimage to the pub to commiserate and grieve with other Brits. They said: ‘We specifically came here, we’d been up the Empire State Building, and we checked the BBC when we got out and decided to come to a British bar.”

The patrons at Churchill Tavern are some of the Royal Family’s most prominent supporters in the U.S. and thus have their own complex opinions. Some opinioned that King Charles should step aside for the young and vigorous William, Prince of Wales. While others wish the public would give Charles a chance, as his mother was. The incumbent Prince Charles has been noted to have many forward-thinking ideas, especially about foreign policy, education, and climate change. However, most patrons agree that it is about time for a change in the monarchy, especially after a tremendous loss such as this. In contrast, others suggested that Australia will now sever ties with the royal family, which was long coming.

Even New York natives with no British ties grieved alongside the rest of the world. Many New Yorkers expressed their long-held respect and love for the late Queen with whom they felt a connection or affinity and spent the day as one marked by grief.

For many Americans, who had grown up hearing fairy tales of princesses and royalty, the Royal Family is of great interest and reverence. Their close ties make up for the U.S.’ lack of a monarchy with Britain and its Royal Family. This has shown why America is mourning this tremendous loss with the U.K.

In recognition of the United States and Britain’s long-shared history and unique relationship, President Joe Biden ordered all flags on the federal building to be lowered to half-staff, where they will remain until the evening of the Queen’s burial, out of respect.

In the U.S. capital, Washington D.C, bells at the Washington National Cathedral were set to chime 96 times, one for every year of the Queen’s life. Downtown, where George Washington was inaugurated as the first U.S. president after America won independence from Britain 250 years ago, the New York Stock Exchange took it upon itself to observe a minute of silence on Thursday afternoon.

The Queen’s visits to New York

New York’s response to Queen Elizabeth’s passing makes one wonder how far the Queen’s influence ruled. If not politically, she indeed ruled the hearts of many New Yorkers. In memory of the beloved Queen Liz, Britain’s longest-serving monarch, here is a look back to her visits throughout her long life to the Big Apple. 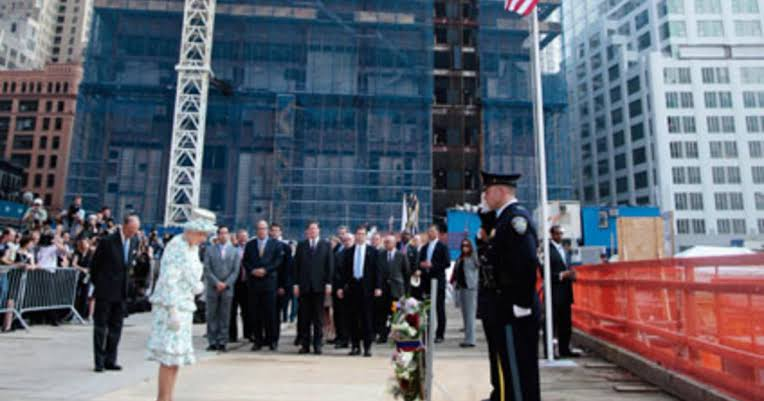 During her life, she visited the city of New York three times: once in 1957, once in 1976, and later in 2010. Each of these visits was highly anticipated by every citizen of the city; it’s not every day a New Yorker comes face to face with the Queen of England.

The Queen first stepped foot on New York soil in October of 1957, with her arrival on Staten Island by train from Washington D.C., where Gov. W. Averell Harriman greeted her and Prince Phillip, the Duke of Edinburgh. From there, the young couple journeyed on to New York. The Queen was then met by Mayor Robert Wagner, who organized a royalty-worthy afternoon luncheon at The Waldorf-Astoria Hotel in her honor.

The Queen’s second visit to New York occurred nineteen years later when in 1976, she embarked on a World Tour. Queen Elizabeth also made a brief trip to Connecticut, along with New York City, during the tour in July 1976. Arriving in the Big Apple on July 9, 1976, she arrived just in time to join in the celebration surrounding the American Revolution and the bicentennial of the United States, 200 years after Americans gained their independence from England.

When she arrived at Battery Park, Manhattan, she was met by Governor Hugh Carey and presented a bouquet of lilies, her favorite flower, by Mayor Abe Beame’s granddaughter. The Queen was also named an honorary citizen of the city during this visit and even spent an after shopping at Bloomingdale’s and greeting happy New Yorkers. During this visit, Her Majesty walked on Wall Street from the Federal Building to the Trinity Church of New York with Mayor Beame. Thousands of spectators greeted her at the Church, and it was here that she collected 279 peppercorns for back rent. Her trip to Trinity Church was especially significant because the Church was given its charter in 1697 by Elizabeth’s ancestor King William III. It was reported that on July 11, 1976, 50,000 eager New Yorkers had lined the docks, streets, and the airport in New Haven for a glimpse of the Queen during her 40‐minute visit.

Her final visit to New York was perhaps the most moving and poignant. In 2010, on an eight-day tour of Canada, the Queen and Prince Philip, Duke of Edinburgh, visited New York. A day before she was to fly back to England, she addressed the United Nations at their gathering, giving a moving, emotional speech full of hope and positivity for the future. This speech was a follow-up to her last U.N address in 1957. 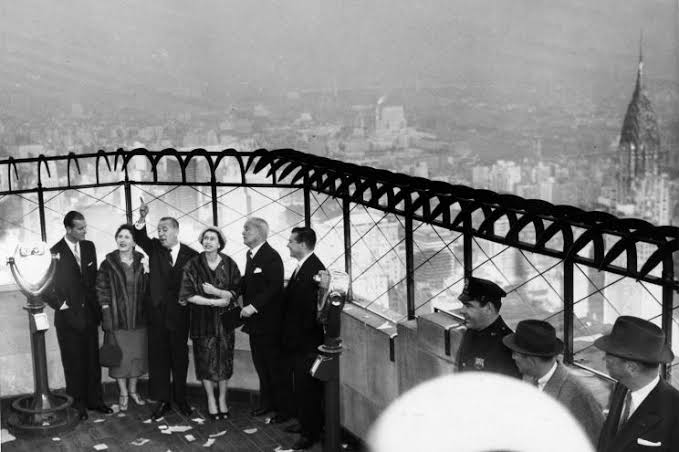 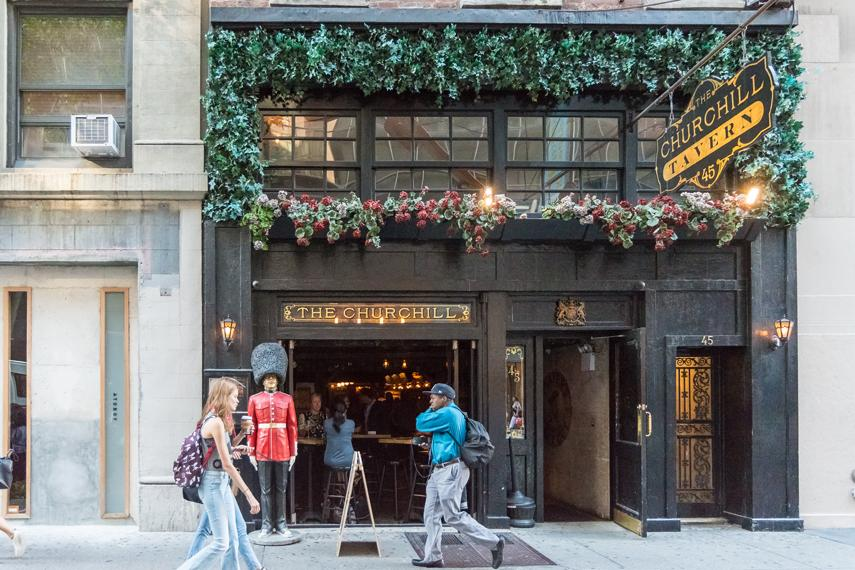 (2022, 9 Sep). Looking Back at Queen Elizabeth II’s Visits to NYC Through the Years. From NBC New York:

Student Loan Forgiveness: A Relief or another Burden on Taxpayer

Is Robert Sarver's rule over the Phoenix Suns coming to an end?